The main objective of random vibration testing is to bring the device under test to failure. Random vibration excites all the frequencies—and therefore resonances—in a defined spectrum at any given time. When all resonance frequencies are excited simultaneously, failure can occur.

Sine tests may be more damaging because all the energy is driven into one resonance. However, random tests are more realistic because real-world vibration is also random. Very few environments are purely sinusoidal.

A random vibration test produces a waveform similar to the field data. However, a random test may not reflect the intensity of the field environment. High peak accelerations present in the original environment can be the source of considerable damage.

A test without the peak accelerations can result in under-testing. The Field Data Replication (FDR) software is one option for accurately recreating a test environment, including high peaks, using recorded data.

Vibration Research’s Field Data Replication (FDR) module can reproduce an original waveform on a shaker in the lab. FDR performs an iterative time-history playback and is VR’s first innovation (1995-96).

With FDR, the test engineer can record a lengthy time-history file and play it back as a control reference. The purpose is to include the higher intensities by replicating a waveform from the field environment. The result is 1:1 replication.

FDR quickly brings a vibration test to the full level and requires minimal setup/configuration. The test does not necessarily have to be random, as the goal of an FDR test is to replicate any environment. 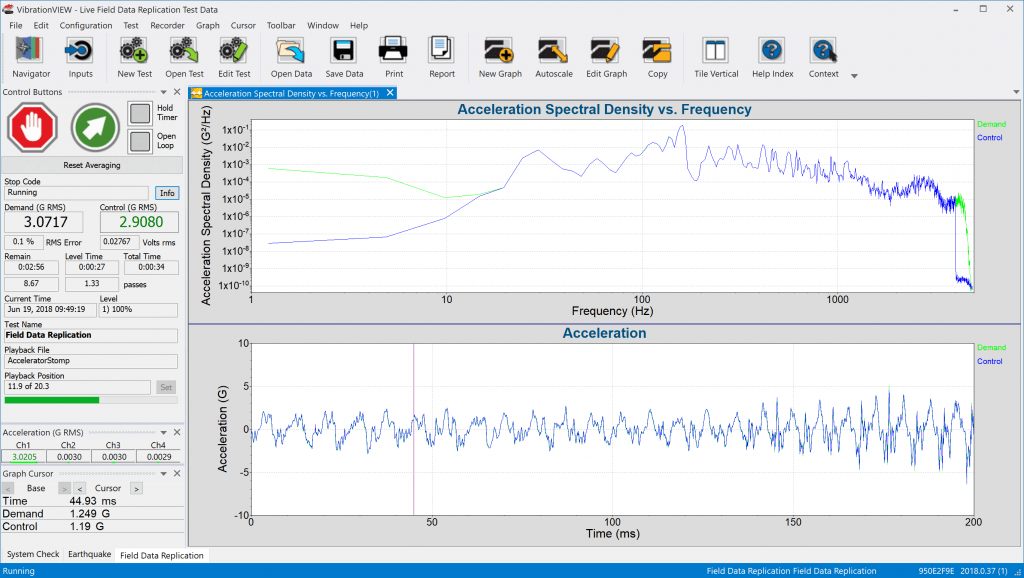 How to Use FDR

To replicate a real-world waveform using FDR, select the FDR test mode and import the data file. Waveforms can be up to 232 samples. Up to five playback files can be used for a single profile, and different channels can be selected for control. From there, the playback file(s) can be analyzed/adjusted with the waveform editor.

The test can be run after the schedule, parameters, limits, channels, and filters are set. The test can re-create the waveform for a specified duration, and the waveform can be scaled up or down by any factor. Additionally, the test can run at different intensity levels for a set duration.

Filters are a unique feature in VibrationVIEW. The engineer can apply a filter to the data stream rather than before running the test. A low pass filter, high pass filter, or notch filter can be applied and modified during the live stream; the controller will automatically adjust the control. This capability allows different frequencies to be removed as the test is running.

For example, the goal of a buzz, squeak, and rattle test is to determine how different components will react to a real-world environment. The engineer may want to reject different frequencies to eliminate an irritable noise. This action will help to determine if any other frequencies complement the noise or if there are noises that may be generated from the same waveform without exciting a pre-determined failure.

With FDR, there is no need to approximate the field environment, and it can be useful in many situations. However, this test development method does not replace random vibration testing. As the replicated waveform is the same as the field data, it doesn’t capture potential variability. FDR provides a representation of one instance in the environment while a random test provides a statistical average. A clear example is provided in “What is Random Vibration Testing?”:

“Where FDR might exactly capture what one driver experiences while driving a prescribed route, random represents the average of thousands of different drivers trying to follow the same course.”

The amount of data required for FDR makes it difficult to define a test standard and a pass/fail criterion. Therefore, there are only a few test specifications based on FDR techniques.