The Random Import option in VibrationVIEW generates a random test profile from recorded data. First and foremost, however, Random Import can be used to analyze statistics from a time-history recording. The behavior of the original environment can be used to help determine the cause of product failure, validate a test method or standard, or compare a current test to real-world measurements.

To view the statistics of recorded data, the random import should be an acceleration time-history stored in a text file. The longer the recording is, the more accurate the estimation of the random import will be.

To import a time-history stored in a text file: 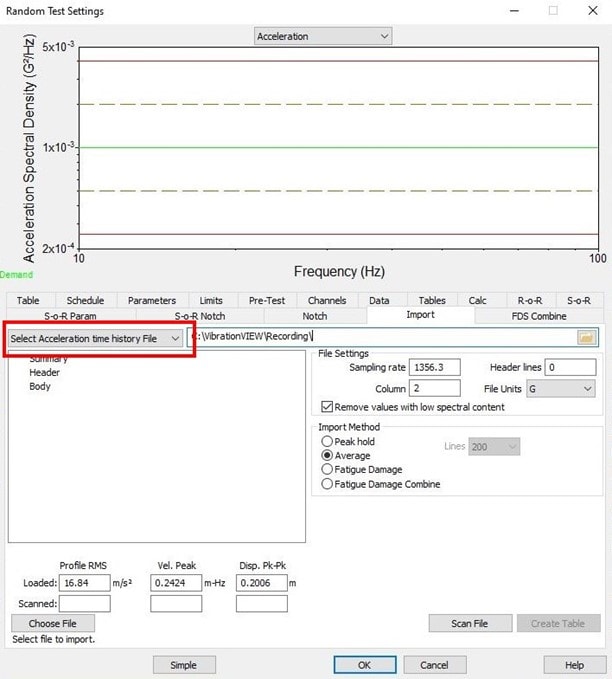 The file will be scanned using the default settings. When the scan is complete, the dialog box to the left will display a summary of the data and a blue trace for the spectrum will appear on the uppermost graph.

If any settings are incorrect, fix the setting and then click the Rescan File button.

The summary in the dialog box will include the following statistics:

These statistics can be analyzed to better understand the end-use environment of the product and generate a more realistic test.

The peak amplitude for acceleration, velocity, or displacement is the greatest value from the position of rest. A peak value can be measured in both the positive and negative direction, and the measurement between the peak positive and peak negative value is called the peak-peak (pk-pk) value.

The average spectrum of random acceleration is displayed as a power spectral density (PSD) and is measured in the units of G2/Hz. A PSD has a Gaussian, or normal, distribution of data (Figure 2).

Random vibration may not display a defined peak amplitude, although the accepted value is approximately 6 to 8 times the standard deviation or 6-8 sigma. Thus, the amplitude is measured instead by the root-mean-square (RMS) value. The RMS is the “power” of the average deviation from the mean value.

The peak value can be estimated from GRMS. We can assume the peak value by understanding the distribution of the random waveform. For example, Gaussian random vibration has a 4.5 sigma peak distribution, so a 2 GRMS random test would have peak accelerations of 9 Gpk. The crest factor, which is the ratio of peak to RMS, can also be used if the value is known.

In a Gaussian curve, most of the vibration values are adjacent to zero, meaning higher amplitudes are less frequent. As vibration testing systems have a maximum capability, the system may limit the peak amplitudes. However, real-world vibration can be non-Gaussian. By limiting the peak amplitudes, significant data can be discounted and result in under-testing.

Kurtosis control methods, such as Kurtosion, modify the probability of peak distributions to include a higher probability of higher peak accelerations, thus more closely reflecting the real world. Kurtosis can help to make a random vibration test more realistic and bring a test item to failure more quickly. The kurtosis value is a measurement of the distribution’s extreme values from the mean or the “tails.”

The Random Import option in VibrationVIEW can be used to create a random power spectral density (PSD) based on averaging or a peak hold import, or a fatigue damage spectrum (FDS) based on recorded time-history file(s) and a user-defined m value. The resulting random test is reflective of the original environment.

Random Import can be used to access FDS, which is the more advanced test development option. However, the peak hold and average import methods are no longer used. We have discussed the current practice of generating a PSD in the Random Testing course and will discuss the generation of the FDS using recorded data in subsequent lessons.