Developing a vibration test representative of the end-use environment is critical when evaluating a product. Many environments contain both sinusoidal and random vibration, and mixed-mode environments require particular attention when developing an appropriate test.

While random tests are standard in vibration testing, they are not suitable for replicating the vibration in this environment. Instead, a Sine-on-Random (SoR) test should be employed to generate a vibration test using recorded data. Below, both test methods are discussed with consideration to devices with rotating parts.

Random vibration tests are representative of real-world vibration; however, a random test cannot be used to re-create the vibration in an engine environment.

All vibration should be represented in a test as accurately as possible. If the sinusoidal vibration caused an engine failure during the original test, then the sine tone profiles must be accurate to re-create the failure. Otherwise, test engineers will have trouble when determining the cause of failure.

SoR is a test method that is better suited to re-create the vibration in these types of environments with recorded data. The sinusoidal and random vibration are processed separately and are then combined to result in a mixed-mode test with sine tones superimposed on a random background. 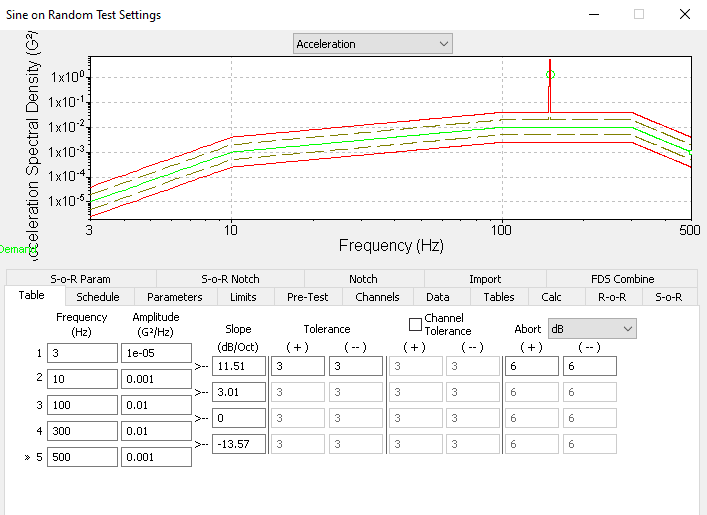 To generate an SoR test, the correct test acceleration method is used for both vibration types. The result is an accelerated vibration test reflective of the original environment.

There is not a standard method of SoR test generation and developing an SoR test can be time-consuming. Vibration Research developed the Sine Tracking, Analysis and Generation (STAG) tool to develop an SoR test with recorded field data. STAG was created with engine environments in mind. In the next lesson, we walk through the SoR test development process using recorded data.