The various classical shock pulses have unique purposes. Generally, each of these unipolar pulses excites a wide range of frequencies in a short period of time, just in different ways.

If we look at classical shock pulses on a graph, we can easily note the differences between the pulse shapes.

The half-sine pulse has a smooth transition; all the change is uniform. The half-sine generates low amplitude, high-frequency energy. Much of the wavelength energy is at lower frequencies and is primarily used to test for responses and resonances in mechanical systems.

The terminal-peak pulse has a smooth ramp and a sharp transition back to zero. The sharp transition generates notably higher amounts of high-frequency energy. This energy generates minimal displacement and has less of an effect on mechanical resonances. It is effective for testing electronic components, solder joints, and electronic circuitry. The high-frequency energy excites potential failures in these components and is commonly used when testing components with embedded electronics.

Visually, the differences between the half-sine and terminal-peak pulse shapes are easy to see. When running on a shaker, the overall velocity and displacement of the terminal-peak are lower, but the amount of high-frequency energy generated by the terminal-peak is much greater. These characteristics must be evaluated when selecting a classical shock pulse.

Square and trapezoid pulses appear as extreme outliers in both a displacement vs. time and velocity vs. time plot. Neither pulse shape is commonly used.

The trapezoidal pulse, with constant acceleration at the peak, is also difficult to create on a mechanical system. There are shock machines designed to create trapezoidal pulses and typically use pneumatics to propel the table up and down. These pulses are exceptionally difficult on electrodynamic, hydraulic, and other shaker systems that are limited in velocity and displacement. 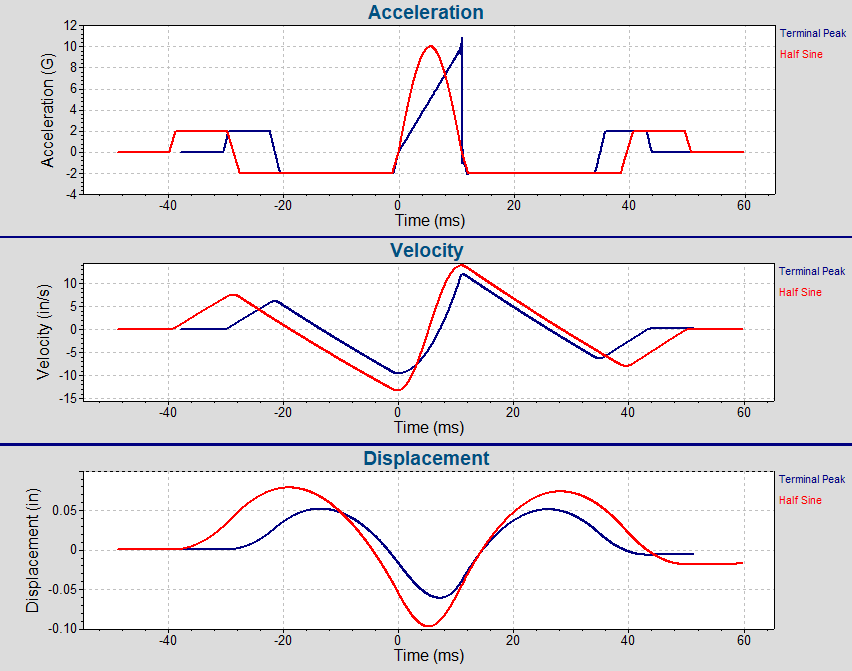 The combination of shock pulses is very common in test specifications. The first, longer duration pulse is designed to excite lower frequency mechanical resonances. The second drives the higher frequencies and can cause more damage if the product’s resonances are in bands of higher frequency. 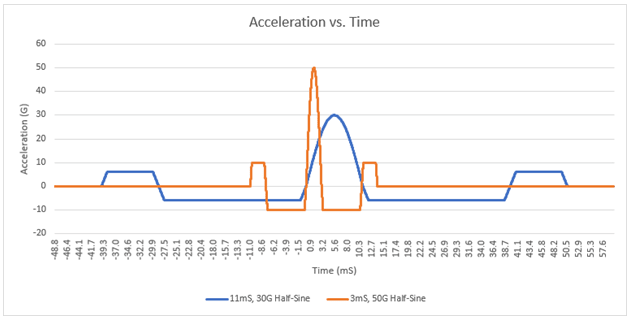 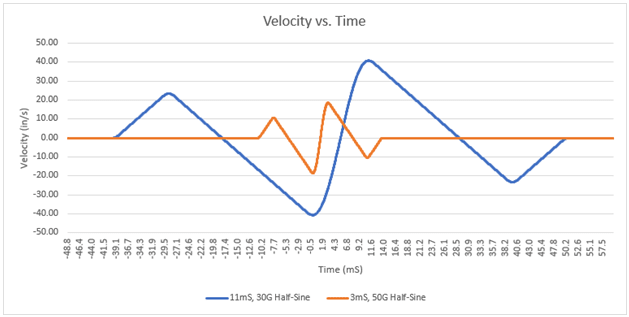 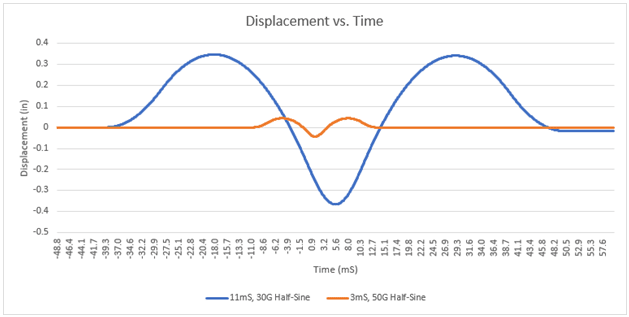 More and more often, vibration tests are recommending to use real-world data in generating product tests. In the shock testing industry, requirements are moving away from classical shock pulses and are instead using some complex time history, shock response spectrum (SRS), or a combination of both. Complex shock pulses are the more appropriate and realistic method of evaluating a product’s response to real-world environments.

All classical shock pulses excite a range of frequencies in a short period of time, but each pulse shape had a unique purpose. In the end, no classical shock pulse occurs in the real world; rather, they are historical references that have been used for many years and are still used to evaluate products today.