What is Shock Testing?

Along with sine and random testing, shock testing is commonly required by most vibration test specifications.

Typically, shock tests are a sharp transfer of energy into a mechanical system to test a system’s capability to survive a drop, hit, impact, fall, explosion, or any other source of transient vibration. The shock pulses can range in time duration from a few milliseconds to upwards of one minute.

Many product test standards require shock pulses for product qualification, durability, and reliability. Shock pulses are defined in the test standard and are classified as either a “classical” shock pulse or a transient representation of a recorded real-world event.

Although most classical shock pulses are defined in terms of acceleration, the main purpose of a shock test is to generate a delta-velocity and then inspect the effects of the delta-velocity on the product.

Classical shock pulses are the simplest method of generating a shock pulse. Classical pulses have a pre-defined shape—such as a half-sine, initial-peak, terminal-peak, square, triangle, sawtooth, trapezoid, or haversine—as well as a pre-defined amplitude, direction, and duration. The library of basic pulse shapes derives from prior drop tests. 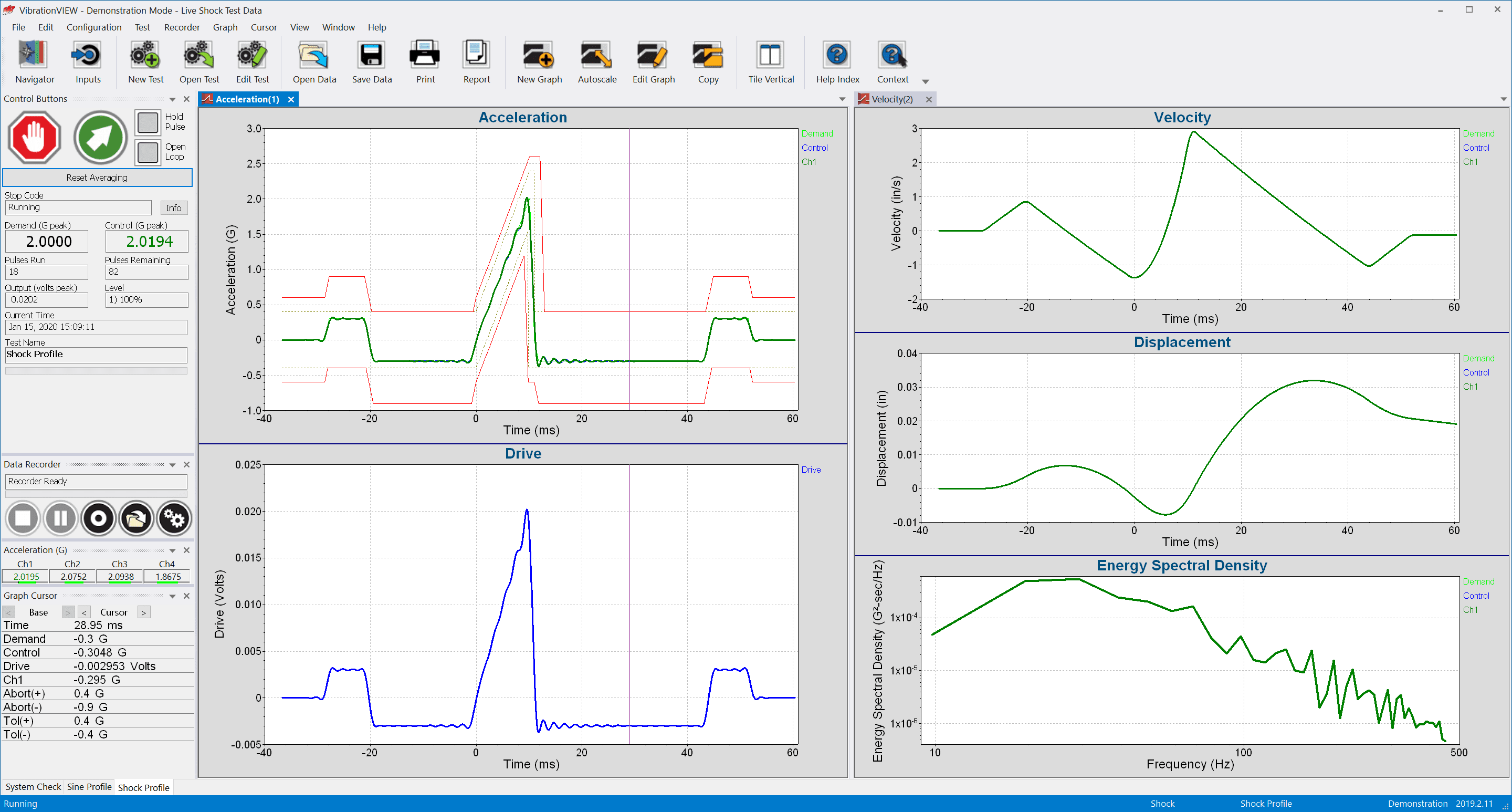 In “A Minimal-Mathematics Introduction to the Fundamentals of Random Vibration & Shock Testing,” Wayne Tustin writes, “We now know that none of those shapes occurs in the ‘real world’…testing machines and procedures were long ago developed to generate those unidirectional, classical pulse shapes. They contain much more low-frequency energy than do most ‘real world’ shock pulses. Often they are deficient at extremely high frequencies” (Tustin, pg. 335).

That being said, classical pulses have historical precedence and generate very well-known responses for product evaluation and durability testing. Many test standards define classical shock pulses, including MIL-STD-810, DO-160, ISTA, ASTM, SAE, and IEC 60068. An example of a classical shock test definition might look like the following: 3 – 10mS, 20Gpk, half-sine pulses in all six orthogonal axes for a total of 18 shocks.

Some vibration tests require a user-defined transient or shock-response spectrum for more complex shock pulses. There are specialized software packages designed to re-create these complex pulses.

Complex shock pulses can be used to better represent real-world conditions. There are many synthetic, calculated pulses that can simulate a complex transient waveform with a frequency response comparable to a real-world environment. It is also possible to replicate a recorded signal from the real world and process the signal using an iterative shock control loop in order to effectively generate and control the complex waveform.

Machinery and Software for Shock Testing

Classical shock testing is run on mechanical shock machines, electro-dynamic shakers, or hydraulic shakers. The system used to generate the shock pulses is determined by the mass of the product being tested, the desired amplitude (in acceleration, velocity, and displacement), and the pulse shape determined by the test standard. We will learn more about shock machines and shakers in the following lessons.

Shock tests are most often measured with accelerometers, which convert mechanical motion into an electrical signal. Depending on the characteristics of the shock pulse, different accelerometers may be needed to properly measure the results of the test. There are specialized shock accelerometers designed to more accurately measure the extreme transitions in a shock test. While these aren’t necessary for every test, they can be useful, especially in high amplitude, short-duration pulses.

For example, piezo-electric accelerometers use a piezo-electric crystal to generate an electrical signal based on the compression of the crystal by some known mass. They are used as a reference for the product input—such as the control signal for shaker testing—and additional monitoring points to observe a product’s response to an impulse.

Additionally, there are software packages designed for IEEE-344 standards, chatter monitoring, and other advanced analyzer functions. These transient events are difficult to characterize and analyze. Additional analysis tools like waterfall plots, energy spectral density, coherence plots, and transfer functions are commonly used depending on the environment and application.

Shock testing tests a product’s capability to withstand transient vibration. Many product test standards include shock testing with a defined shock pulse. There are two categories of shock pulses; classical pulses are simple and unipolar, but some tests require more complex pulses.