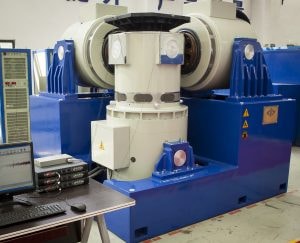 There are three linear axes of motion in the x, y, and z-direction and three rotational axes: pitch, roll, and yaw. A multi-axis test subjects a device under test (DUT) to vibration from two or more axes simultaneously. The test setup includes one vibration controller with multiple outputs or multiple controllers. The output to the shakers can be the same or individual test profiles.

Although it is a more time-consuming process, single-axis testing can capture the effects of vibration at each axis. However, it cannot act out the effect that the individual axes’ vibration has on one another or the whole system. Not only is multi-axis testing more rigorous, but it reflects real-world vibration much more accurately.

When to Use Multi-Axis Testing

Typically, excitation is multi-directional. If there is a multi-axis loading scenario in the field, then multi-axis testing should be employed if possible. As outlined in the introduction, there are many types of multi-axis tests, including:

Determining when to select a multi-axis test over a single axis will depend on the recorded environment and test specifications. According to MIL-STD-810G Method 527:

“As a result of the increased complexity of application of MET [multi-exciter testing] over even multiple application of SDOF single-exciter testing (SET), an analyst after careful review of the available data and specification, will need to provide rationale for selection of the MET method.”

Multi-axis testing is a promising development, but its configurations raise several concerns. The test setup requires attention to new details.

A multi-axis configuration may require the coupling of multiple shakers to a table. Ideally, a shaker moving along one axis should transfer its motion to a table without affecting the other axes of motion. When the coupling is set up properly, the shaker should move the table along one axis without causing significant motion in the others.

Cross-axis motion occurs when excitation along one axis excites another axis or axes. An example would be a slip table moving side to side when it should only be moving forward and back. While we cannot eliminate cross-axis motion, proper coupling methods can minimize its effect.

A common coupling method employs hydrostatic bearings, which allow connections to pivot freely and permit the transmission of motion from shaker to table. Sliding bearings are another option. Whatever the coupling method, the goal is to transmit motion without exciting the other axes and let the table move as freely as possible when excitation is applied.

Resonances are more difficult to control in cross-axis motion because excitation along several axes can potentially excite a resonance along another axis/axes.

The Sound & Vibration article titled “Defining the Global Error of a Multi-Axis Vibration Test” describes the potential for differences in excitation levels during multi-axis testing and includes ways to account for the differences. As the article mentions, engineers must design the reference profiles so that resonances are minimized not just along one axis but several.

Salt formations on a shaker table.

Transverse sensitivities produce noticeable effects in a multi-axis test because the system is intentionally moving in all directions. Most tables or fixtures aren’t perfectly rigid; for instance, see the salt formations that a shaker table generates. As such, accelerometer location matters.

Accelerometer placement must consider the number of accelerometers and their location. Engineers often use multiple accelerometers in conjunction with one another to determine motion at a particular degree of freedom. In such cases, the effects of their placement are magnified.

The design of the table’s head expander is also affected by multi-axis configurations, as resonances must be minimized along several axes.